To those who wish to know the hidden wonders of Marche, who long to move away from the frenzy of the global world, we propose an itinerary capable of helping them to find their inner self by letting the voice of nature rock, the flow of story submerge, and ancient tales amaze them.
San Vittore delle Chiuse, a borough in the municipality of Genga, can offer it all through a voyage into pagan legends and Christian sacredness, brings visitors back to remote ages in front of fossil findings and surrounds them with its almost untouched, lush environment.

And it is nice, to me, to sink in such a sea

A gem set in the mountains
Sumptuous and lush is nature in the Frasassi canyon, rich with green pine groves, with the multicoloured facets of its rocks and with thick, dark green woodland where in autumn yellow, orange and red shades completely change the palette of the landscape.
The Abbey of St. Vittore delle Chiuse raises in a gorge, between the Valmontagnana mountains and Frasassi and is protected, like a precious gem, by the natural amphitheatre of the mountains. An atmosphere filled with peace, serenity and harmony surrounds and welcomes visitors. There is a poetic twine of manmade and natural sacredness, of human and divine, of history and modernity. Everything looks unchangeable and dominated by the unspeakable power of Creation.

Rave di Clusis
The name “delle Chiuse” is due either to the river which in the middle ages was called “Rave of Clusis” or, possibly, to the fact that the abbey is fully surrounded, “enclosed”, by the mountains. The immense natural environment reminds the caducity of man in the unstoppable flow of time, its majestic extension represents the power of the divine Creation; and the convent wrapped in the embrace of this sacred environment invites men to concentrate in meditation and prayer.
Sentino and Esino, two rivers rich with sulphurous water, which flow through the limestone rocks to meet here, symbolize purity and rebirth. Here, in Roman times, rose a spa whose remains could still be admired till the thirties of last century.

«And men go and admire the mountain tops,
And the great waves of the sea, and the long flow of rivers,
And the immensity of the Ocean, and the course of stars.
And forget themselves»

The historical path
The origins of the monastery date back to the last years of the 10th century. It was built by local Langobardic rural lords, and was dedicated to St. Benedict, St. Mary and St. Victor. For centuries it was occupied mostly by Benedictine monks who were committed to prayer, farming and managing the nearby hamlets. Feudatories kept for themselves the legal patronage of the monastic complex. In the beginning of the 13th century, when it ruled over 42 churches, many properties and wide extensions of land, the convent got to the top of its splendour. Its decadence begun during the rule of the simoniac and frivolous abbot Crescentius, a son of Alberghetto I Chiavelli (1308-1348). In the 15th century it was suppressed and annexed to the Monastery of St. Catherine in Fabriano.

Architectural musicality
The monastery, built with white and pinky limestone, is a real jewel of Romanic architecture. The harmonic geometry of the church is due to the musicality of its simple structure, characterized by a Greek cross plant influenced by the Byzantine culture; above the square at its centre raises a dome with an octagonal lantern. The rhythmic internal elegance is marked by four columns crowned with cubic capitals, which divide the convent into nine aisles, topped by cross vaults. The perimeter is adorned with five semicircular apses. Above the simple Paleochristian outside façade raise a low cylindrical tower and a tall square defensive tower which make the structure look like a pure and safe fortress. On the right of the façade lie the vestiges of the ancient monastery, now set up as a naturalistic, speleological and archaeological museum.
Harmonic and suggestive in its simplicity, the abbey is a focal point of humanity, nature and divinity. A sense of divine infinity can also be seen in a sign, clearly visible on the left of the altar. It is a lying down eight which, designed this way, becomes a symbol of infinity. Its origin and its meaning are rich with mystery and lead men to push their gaze beyond the limits of things.

The cave of infinity, also known as “cave of the goat”
While visiting this sacred and magic place one can admire both the surprising majesty of the environment and some as much spectacular human works as the Roman bridge across the Sentino river and the tiny medieval tower. From here, in addition, one can have a glimpse at St. Vittore Abbey, a Gothic structure rich with legends and magic.

The Cave of Infinity, or Cave of the Goat, not far from St. Victor Abbey, opens on the eastern slope of Mount Vallemontagnana. Its main name is due to the intricacy of its cavities. It has got two main halls: the so-called “guano hall” reminds that the cave was once most of all a den of birds, which indeed still keep living there and the “hall of the lake” overlooks a pond that marks its end. 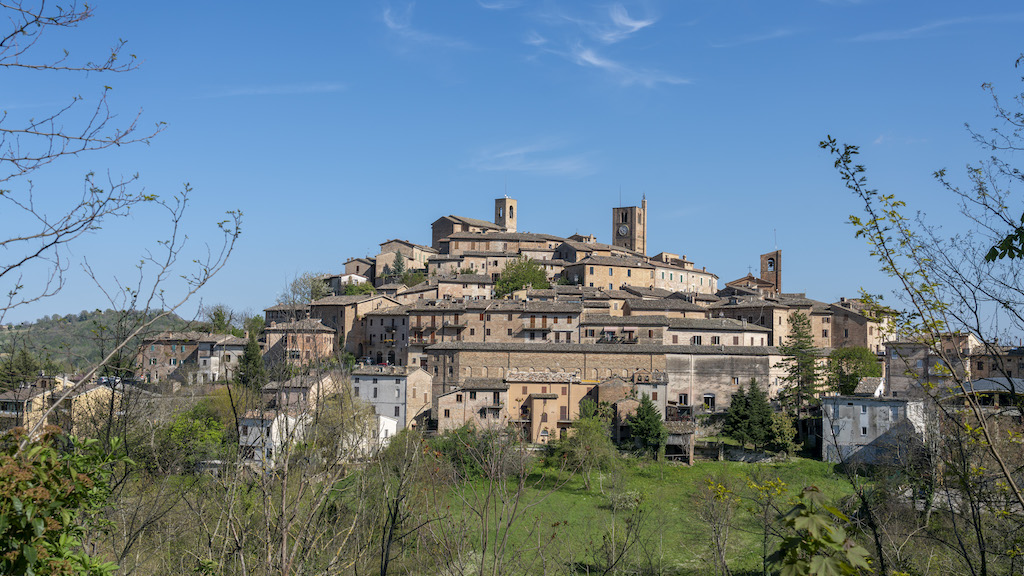 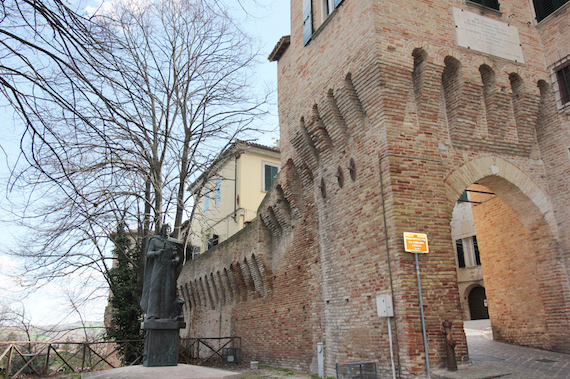