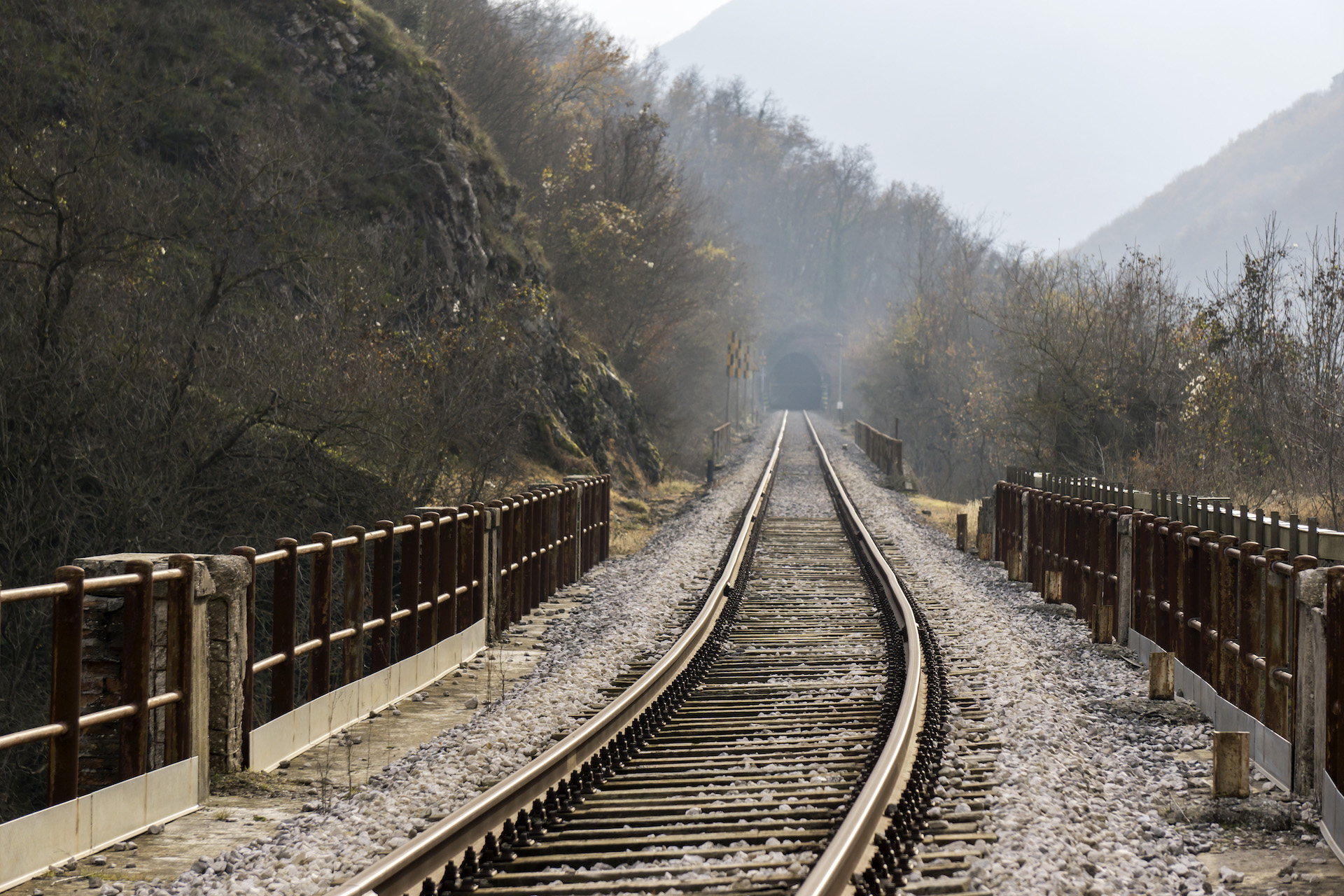 Old railways, isolated tracks, bridges, galleries, and ancient stations where the old steam trains used to stop. The tracks of the abandoned railways are in themselves a patrimony: hundreds of winding track kilometres twisting and turning in the territory of Marche which connected cities, towns and rural hamlets where trains to not reach anymore. Nature often took possession again of those places and invaded the tracks abandoned since the forties and the fifties of last century, when in Italy, due to the development of the car industry, thousands of kilometres of railways were dismantled. Marche too paid their price and lost railway connections with many cities in the hinterland. Data of RFI (the Italian Railways Network) referring to July 2015 mentions 286 kilometres operating tracks in total. The main line runs north to south by the seacoast of the region. But the smallest inland towns and hamlets have been abandoned by trains, which no longer reach there, and old stations have been abandoned too. Let us move together along those tracks, on an illustrated trip which will lead you in a trip rich with memories and history.

Inaugurated in 1908, the Porto San Giorgio – Amandola railway was terminated between 1955 and 1956. The line moved from Porto San Giorgio station and halted at the Castiglione junction where it forked towards Fermo and Amandola; it then reached to St. Lucia station, followed part of the Tenna river valley to get to Monte Urano – Rapagnano station and, after that, Grottazzolina, Magliano di Tenna, Montegiorgio, Belmonte Piceno, Monteverde halt, Falerone, Servigliano, Santa Vittoria, Monte San Martino, Monte Falcone, to finally scramble up to Amandola, 550 metres above sea level. Few signs are left of the track. The railway path is only partly recognizable, being often interrupted by cultivated fields which swallowed it or having been transformed into roads inside the towns.

A long section, between Fermo and Grottazzolina, was transformed into the Provincial Road No. 157. The city of Fermo is mobilising to recover and redevelop its ex railway. At the time of the first project, dating back to 1879 but never completed, the railway had been called “Adriatic to Appennine Railway”, because it was supposed to create a connection between the Adriatic and the Appennine lines, which had to be created along the Tenna Valley up to Visso Pass, to finally reach to the Val Nerina and to Terni. Today’s password is “soft mobility” and one of its essential requisites is precisely the recovery of dismissed territorial infrastructures of which Spoleto, thanks to the works performed on the dismissed railway and to the economic and planning cooperation between the involved entities, would become an important national hub.

The turning point for the construction project was reached on August 12 1894 when engineer Ferretti proposed to the city council of Camerino a project for the construction of a steam tramway which would move from Castelraimondo and reach up to the slopes of the hill on which raises Camerino wherefrom, to get to town, it would be necessary to board a cable railway. The project was meant to break the isolation of the city, which by the way hosts a University, but being considered too much complex it was set aside till 1906, when the railway was inaugurated. On the night of November 27 1930, a serious accident occurred: an electric engine derailed in Villa San Paolo and killed a ticket agent. It also stopped the service, due to the state of materials and to previously found problems. The railway stayed closed for five years, during which the whole infrastructure was renewed. Trains came again there on September 8 1935, till the definitive stop in 1956. The track is now almost completely incorporated into the National Road No. 256, which runs close to the railway along most of its path. All stations have disappeared, except for the Mergnano station, which is inhabited and used for commercial activities.

In practice, the line was discarded in successive stages: after abandoning in 1944 the section Fermignano – Pegola because of the damage it had undergone during World War II, in 2013, due to a landslide, also the section Pergola – Fabriano was stopped. On the contrary, after the section Fermignano – Pergola was closed, the Urbino – Fermignano was united to the Fano – Urbino line, which was closed too in 1987. Long sections of the railway path from Fermignano to Pergola, dismantled il 1971, are now easily recognizable as dirt roads. Works are in ruins, or were destroyed by the war. Service buildings are generally abandoned and in different states of conservation. From Pergola to Fabriano, instead, the rails are still in place and stations and halts are generally in a good condition, except for the ones in Bastia Rucce and S.Donato-Coccore, unused since more than a decade.

The Fano-Urbino railway connected the cities of Fano and Urbino from May 1, 1915 till January 31 1987 through the valley of the Metauro river. The line, about 50 Km long, got through Rosciano di Fano, Cuccurano, Cartoceto-Lucrezia, Saltara-Calcinelli, Serrungarina-Tavernelle, Montefelcino-Isola del Piano, Fossombrone, S. Lazzaro di Fossombrone, Calmazzo, Canavaccio, Fermignano and ended in Urbino. The line is still clearly visible, and still fit out, for most of its extension, even though the rails are covered with vegetation and asphalt in many points. The section closest to Fermignano and up to Urbino is kept efficient by the members of the FVM (Metauro Valley Railway) association and occasionally is used to move railway bogies. Some unstable service buildings, such as the Rosciano di Fano station (suppressed many years before the line was closed) were demolished. Fermignano and Urbino stations, instead, are in an excellent condition, and their tracks are perfectly efficient. Urbino, in particular, was restructured in 1985 along with the whole line, and till not long ago was used to park carriages awaiting demolition. Since 1985 some signs of recovery were noticed and some special steam trains for students travelled from Fano to Urbino. However, due to a more and more serious crisis, after growing pressures from the Marche Region Ferrovie dello Stato (The Italian national railway service), which had already started a bus replacement service travelling on the parallel highway, decided to definitely close the Fano-Fermignano-Urbino line.