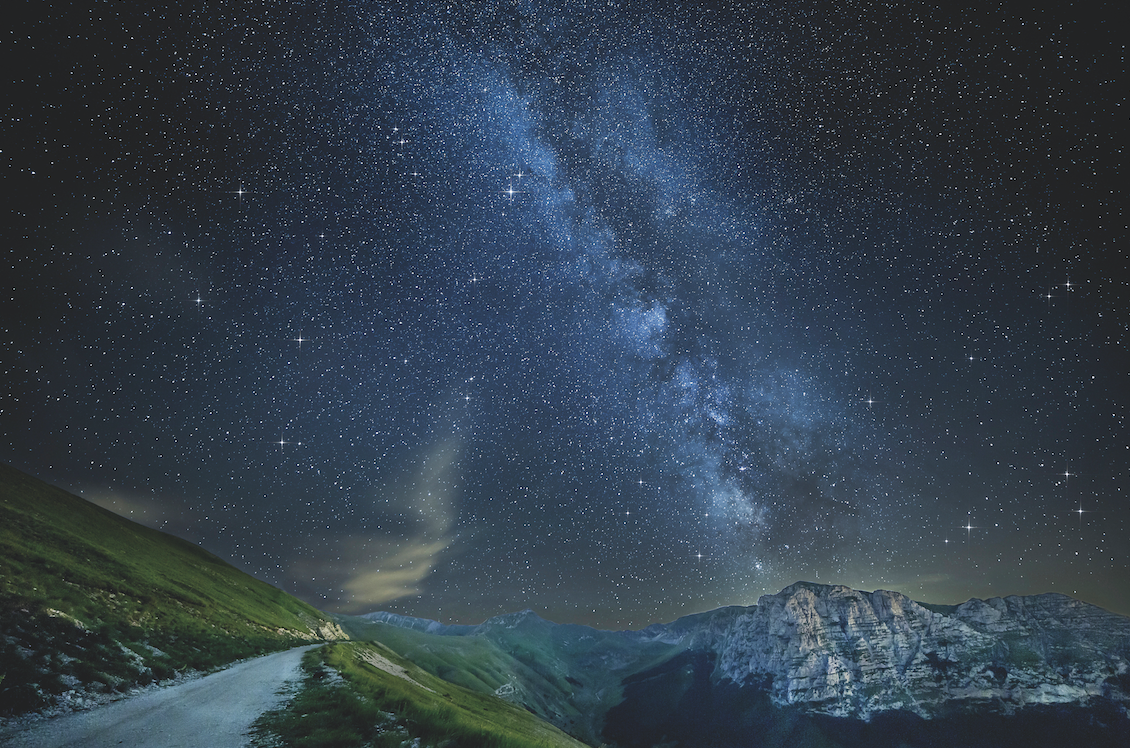 Sweet and clear is the night, and there’s no wind
and silent above rooftops and the fields
rises the moon and shows the clean, remote
profile of every mountain.

Giacomo Leopardi wrote these evocative verses, in his poem La sera del dì di festa (The night of a festive day), to evoke a clear and peaceful night in Recanati, brightened by the reassuring light poured by the moon above mountains and hills.

How do we imagine Marche by night, nowadays? We are used to watching their history and culture, poetry and art in daylight; and it is during the day that we taste good food and sip the excellent wines which made us famous worldwide, enjoy the breathtaking landscapes offered by our mountains, hills and sea, walk in hamlets and castles, along city walls which embrace ancient villages and medieval churches, the architectonic pearls our region is rich with.

What happens at night? Marche then show their magic. They let us sit on the grass, surrounded by crickets and fireflies, to enjoy the charming view of places untouched by light pollution where one can admire the stars, identify the Milky Way, fix the eyes on the constellations.

There there is a falling star; and there a night butterfly! Nature, the absolute protagonist  of the night, becomes more and more fascinating between the shadows and a silence, broken only by faraway voices of birds of prey. Thus with such an enchanted background, Marche offer one of the most charming shows of summertime.

the day has eyes. The night has ears

The legend of the mermaid on the Two Sisters cliffs.

Once upon a time, in a little fishermen’s village near Ancona, under the Conero mountain, lived a beautiful girl named Mitì who every day waited for her fiancé to come back from the sea and, at sunset, started calling her love with a song. He had come in her dreams singing “Come to me, my bride! As a mermaid I want to meet you, bring you on the waves and bind you with my love”. One day a boy came on a boat; Mitì ran to him, but was told that her love was promised to another girl. Pain pushed her to swim behind the boat of the couple, singing a sad and unintelligible song, until she disappeared and nobody could see her anymore. Nobody knew anything about her since; but the legend tells that she became a beautiful mermaid and that sometimes sailors heard her melodious and charming song coming from the waves during stormy nights.

The most famous of all is the historical and in the meantime magical story of Sibilla (Sybil), whose namesake is the Sibilla Cave, also called Cave of the Fairies, on the Sibillini mountains in the province of  Ascoli Piceno, more than 2000 metres above sea level. The legend says that this cave was the door to the underground kingdom of Queen Sibilla, an ancient priestess, the custodian of ancestral secrets and even capable of predicting the future and mediate between men and God.

A legend tells that in the XVII century, in Transylvania, mean Earl Urit, lord of Biartèn county, tore down all ancient forests in his territory to sell their wood. Full of greed for riches and power, superb, arrogant and pretentious, the Earl ordered sprites, elves and gnomes who had been living in the woods for thousands of years, to quit the county menacing to put their homes to fire. Sixty-six sprites, led by old Fruièras, did then start their quest for a nice and peaceful place where they could live in harmony with nature. They crossed Hungary and Slovenia, travelling for no less than 1888 miles, and after a 55 days long journey they finally came to the Appennine Mountains, into the territory of Earls Brancaleoni del Castello dei Pecorari, close to Montiego Mountain. Here, in a little valley between Fonte dell’Orsa and St. Martino, in the province of Pesaro Urbino, they decided to stay. The night belongs to sprites: they wake up at sunset and go to bed as soon as the first sunbeams appear.